It’s already been a month since Bear turned two, and since the second anniversary of her death. It’s such a mixture of feelings. My heart can’t quite decide if it’s completely broken or bursting with love; I’m a funny little bundle of both.

There’s been so much anxiety in the build up to her birthday. I was so scared I wasn’t going to do enough. I was scared her days wouldn’t go right. I was scared people just wouldn’t care anymore, and wouldn’t talk about her. Last year I worried about all of these things and people in my life went above and beyond to show me that wasn’t the case. This year, whilst I so bloody appreciate everyone who has made the effort and gotten in touch, there’s also been a noticeable radio silence that wasn’t there last year and as much as I wanted to it was very very hard to ignore. I wrote about it, the day before Bear’s anniversary, to sort my head out, get those feelings out, and feel a bit more positive, which I do. But I also feel like the experience has hardened me somewhat. I feel more protective and less inclined to share, and I’m trying to resist that, because being honest and open feels good and I’m surrounded by beautiful people. I don’t want to let feeling low and fear that she’ll be forgotten rule these days. I’m bloody proud of myself when I’m focusing entirely on my babies and not letting the people who’s complete lack of acknowledgement of my daughter trigger that anxiety that nobody cares. So, bluntly, screw them. This is all about my baby and her fun!

For Bear’s birthday we bought her cards, and got her books and stickers as presents. We started buying her books for her first Christmas and have built on that ever since; we love the idea of her having a little library to share with her siblings, cousins and friends. Bunny picked up The Tickle Book by Axel Schaffer and decided on that, which she’s insisted on me reading a thousand times since, to the point where she can now say ‘tickle’. I love finding cute stickers for Bear’s journal too, I got some little rubber duckie ones. I spent Sunday night making her cake; which is quite possibly the most perfect cake I’ve ever made; it went so well and was so yummy! When I made Bunny’s cake it was such a stress and I said at the time that in six weeks it was Sod’s law that Bear’s would go perfectly. She does love to play a prank on me! 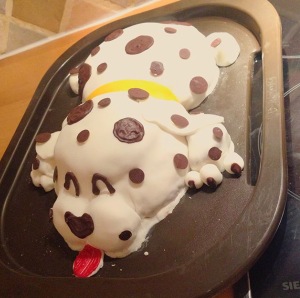 I received messages throughout the day and so many of our family & friends gave Bear cards and presents. Sitting there opening her cards and presents with her Daddy and Bunny in the evening, together, as much a four as we very can be, felt gorgeously normal. That probably sounds crazy, because it’s really pretty out of the realms of normal compared to conventional families. But Bunny was opening her sisters presents and playing and we were happy and full of love for Bear. Perfect moments are those full of my babies; I refuse to let grief take that from us.

We went to baby group in the morning as I wanted some normality for Bunny. Our wonderful friends got Bear the most gigantic and mischievous balloon. It was determined to get tangled up with the babies and make them laugh and cause me a world of chaos taking it through town to get home. I had a giant balloon bopping me in the face and couldn’t see around the pram which Bunny found hilarious, our Bear causing chaos. When we stopped for lunch I had an absolute wally of a woman moan about me breastfeeding Bunny – the first time I’ve ever had any issues with that. She actually walked out of the restaurant, and no, she obviously didn’t know what day it was, but regardless, what a bizarre way to behave! It really wound me up, on an emotional enough day, but seeing the messages from friends and family, and so many people changing their profile picture to the one I’d designed for our little monkey made me chill out a bit, take a breath, a smile for my little monkey. It’s a bit like being asthmatic and acts remembering or celebrating her are Salbutamol; it chips away at the knot of anxiety in my chest, it makes it easier to breathe.

Bunny & I went to Bear’s park, where we used to live. Last year Bunny was tiny and snoozing in the pram that has been hers and her sisters, she had a bottle and the little cafe and liked blinking around looking at the contrast of the trees against the sky. She wore her first 3-6 outfit and I had to pump in the car. This year, she was running around the park independently, playing on the playground, going down the slides. She had ice cream and a hotdog at the cafe, and threw food for the ducks. She did need a nap after all that excitement. I can’t wait to see how different things are next year, too. Whilst it was sad, thinking back to all our walks there pregnant with Bear, dreaming of a future we never though we’d lose, I love seeing Bunny there. 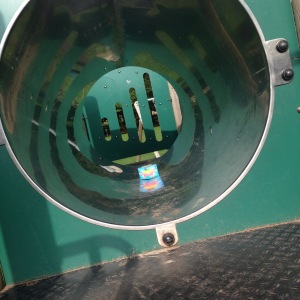 I did find the day itself difficult and upsetting for a multitude of reasons. Throughout the week our acts of kindness in Bear’s memory started to out that spark back into me and give me a little hope. We stuck up compliment posters, we made cakes and gave them to friends, we left little toys at Bear’s park and at soft play and loads of other places. My mum and sister got involved a lot too and spread Lily love around Skegness and a few of our friends. My sister did kindness rocks and donated books in Bear’s memory to the libraries. I’m not going to lie; it was completely gutting that this year significantly less people bothered to get involved and remember her. The responses I got from our little acts of kindness however, made me smile again, hugely. That was truly and utterly Bear and her joy.

We had some lovely adorable messages where our acts of kindness had been found. We even got to see some people find them which was super adorable. I felt full of Bear and her love! My favourite response was from a little boy called Archie, who found one at L’s park, his Mummy Sharon messaged our Facebook, we moved to the village at the same time and both fell for the magical homeliness of the place. It definitely felt like L chose to give Archie one of her slinkies; my special little girl has always seemed to have an ability to pick out the most beautiful souled people the world has to offer. 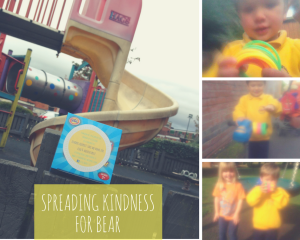 I love love LOVE when we took Bunny to Whacky Warehouse on Bear’s anniversary. She was tearing around the place loving it. It was a difficult day; that’s an understatement. Unlike the previous days I felt nervous. I didn’t feel like talking to anyone, like we had on previous days, and given slinkies to parents, and I wanted to make sure they found homes. I gave them to a staff member, Emma. She’s bloody brilliant. Every time we go in she’s so welcoming and chatty. I explained what we were doing and she offered them to parents as they came in and explained our story beautifully! It was really really lovely to see little ones running around getting tangled up in them and a couple of mummies messaged us photos and videos, which were adorable!

This is something I want to do every year. Through any disappointment or feeling let down, making complete strangers smile by just brightening their day in a way that Bear would absolutely adore; that feels amazing. It’s that big bright inner sunshine that has my soul beaming with pride for my little girl. Those are the moments I’ll always chase. I’ll fight the anger, the pain and any triggers that cause it, and I’ll change the world, with and for my babies.

View all posts by littlebearblogs